I wish I had words to tell you what it’s like in New Orleans and all outlying areas … places like Slidell and Chalmette.

It’s been almost 2 months now since Hurricane Katrina hit and there’s still no electricity, water or sewer in many areas. Certain areas seem to be recovering some…Metairie for example. A few restaurants opened, a few gas stations, a few hotels. Now some stores up at one mall have opened…and a Laundromat, thank God! 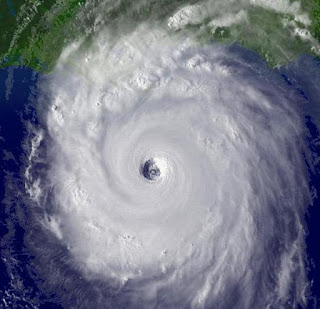 We could use a nail and hair salon though. Out in Chalmette, the parking lot of the old Walmart is being used by the Red Cross and others as a staging area. They offer free haircuts there in a little tent. I took some great photos yesterday. It’s like a 3-Ring circus out there. There are army jeeps and armed soldiers everywhere and thank God for them! It feels safer now to be out on the streets every day, from sun up till sun down. 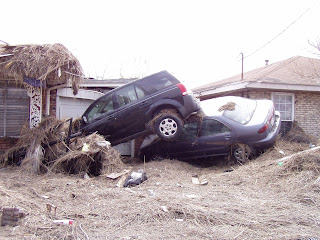 Here in the French Quarter, a few restaurants have re-opened, many of the bars are up and running, a few hotels. It’s still not unusual to go into a place that is open and be told that you can only get a few things on the menu and they can only take cash.

Every store, gas station or restaurant that is operating right now is always packed. There are lines everywhere you go. It can be exasperating. Credit card machines often don’t work. Hard to find a working ATM machine, the crappy phone service will drive you nuts…imagine a city this big and you have to drive and drive just to mail a letter. 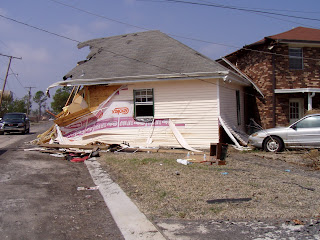 Raising Cane’s Fried Chicken on Independence opened a few days ago. Every time I go by there, the line is at least one block long. I just don’t have that kind of time to waste, so it’s no fried chicken for me.

We’ve all gotten used to seeing dead refrigerators lining all roads for 50 miles in every direction. None of us even notices if there’s a mattress in the middle of the freeway to dodge. Or a piece of aluminum, rubber cables, shoes, trash…sometimes there are boats, cars and parts of houses. Daily we run over all kinds of strange debris. You can’t tell what it is sometimes. 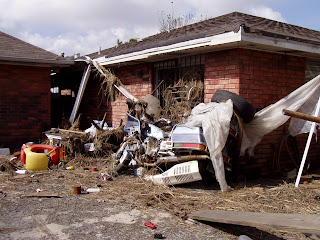 It seems to be getting worse instead of better. At lunch I go up to the Walmart and the Red Cross feeds me. While there I pick up an MRE and that’s what I eat for dinner. Most of us are taking all the inconveniences in stride and going about our day, but Hurricane Katrina is still the major topic of discussion, whether you’re in line at the store, at a gas station (I still carry 10 gallons in my trunk just to be on the safe side) or in a bar. 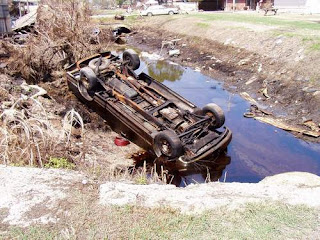 Too many people lost too much. It will be a long time before they forget…a long time before it stops hurting so badly. Even the men break down and cry at some point during the interview. It never stops bothering you to hear them talk about the homes and lives they used to have…before the hurricane tore it from them. 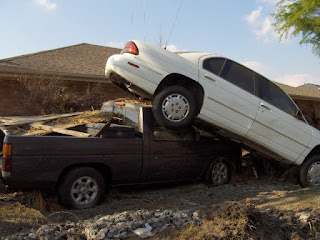 I sense a desperation in them now….some thoughts have settled in their minds. The realization that this is not going away. They won’t wake up tomorrow and find it’s a terrible dream…this is the way it will be from now on. No place to live, no furniture, moving around constantly.

The Hurricane Gypsies, I call them. I can’t imagine what their lives will be like this time next year. Will they all be living in FEMA trailer parks, raising their kids? Mowing tiny yards? Trying to forget the lovely homes and things they once owned? 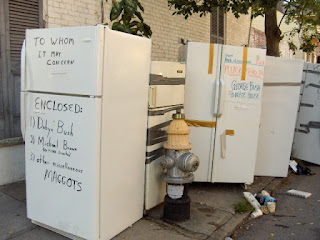 This morning I did an inspection for a sweet old lady. She said, “Well, normally I’d invite you into my kitchen and we’d sit down at the table to sign these papers.”

I smiled. “I bet you’d have coffee and muffins or something.” 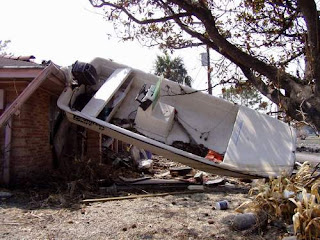 She smiled back and nodded. She was 78 and pretty spry. She told me that the things she missed the most were the pictures of her family…she said it nearly killed her when she realized they were all lost in the storm.

She also lost several quilts her mother made for her. She had a Shirley Temple doll from 1939 that was irreplaceable. I listened to her and tried to imagine what her kitchen would have looked like. It would have been a warm, nurturing place that smelled of cocoa and cinnamon. 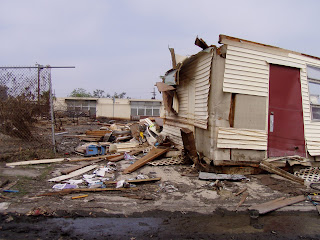 It was cold here this morning, a sharp biting wind whipped thru me all day. This would have been a great morning to sit down at her kitchen table with coffee while we signed the government papers.

Instead, we stood outside beside her auto in a road still littered with large piles of debris … dead and broken things. We tried to ignore the awful stench of nearby rotting refrigerators. We climbed over parts of a couch and table to get up to her house but couldn’t go inside because of the snakes and deep mud mixed with oil and benzene…thank you Murphy Oil Company! 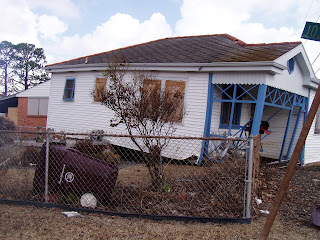 It was hard to stop thinking about the sweet 78 year old woman who had lost everything she saved and collected for a whole lifetime. Some nights, it’s so hard to sleep.

Say a prayer tonight for the Hurricane Gypsies. 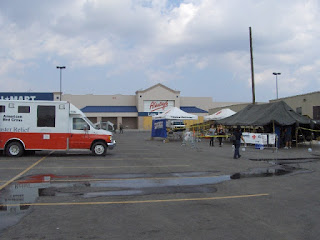 NOTE: Recovery from Hurricane Katrina took many years and cost $108 billion dollars. Some of the residents never went back home. 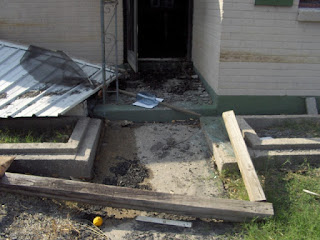 Posted by AnneCarol at 6:20 PM